The central part of the service quarters is framed by two towers with large slated roofs, remnants of the defense system of the former fortress. During the reign of Henri IV, they were renovated to be symmetrical. One tower serving as the royal prison for convicted men en route to the Havre. Every lord who had the power of “Haute justice” was required to maintain one such stopping point. The other tower became the lodgings for the coachmen.

The central part of the former stables is topped with a magnificent leaded skylight and has a beautiful 17th century oak frame. Modifications made over the course of several centuries have rendered the interior architecture particularly interesting, because it contains in the one structure every type of Norman construction style:

dressed stones and quarry stone, cinderblocks, half-timbering over glazed bricks (to protect the wood from humidity), and locally baked pink bricks. Since its restoration in 2008, this former stable holds display glass cases containing ancient tools as well as planks of wood from the trees in the park. Depending on the species, the trees’ veins and the colors are highly varied and make for interesting comparisons.

Monsieur d’Acquigny was a pious man and an intrepid builder. After completing his duties as President at the Parliament of Normandy, he wanted to leave the outside world behind and live according to the rules of the Trappist monks in Soligny. For this purpose, he had the “Petit Château” constructed in 1774, where he lived until his death in 1788. This “Petit Château” is known today for being the largest private hermitage in France.

The hermitage is listed and adjacent to the Church of Sainte Cécile and to the chapel of the Holy Ghost, which served as the Château’s chapel until the Revolution. Monsieur d’Acquigny could attend offices in church from his private oratory by an oculus that opened into the decoration of the choir of the church.

At one end of the roof, a small bell tower marked the hours of the offices. At the other end, the angel of the last judgment appears as a weathervane to remind us that we must prepare ourselves for all that awaits us in the afterlife.

The architecture of this typically French construction is both simple and harmonious, much like the lifestyle Monsieur d’Acquigny chose to lead. The symmetry and the interplay of colors – blue slate, pink brick, white stone – play an essential role in the beauty and the balance that radiate from this building.

The orangery off the park “à la française”

In 1746, Monsieur d’Acquigny commissioned the Rouen-born architect Charles Thibault to construct a pink brick orangery along the border of the Iton River. At 27 meters long, it can accommodate up to sixty orange trees and as such is the largest private orangery north of the Loire. Inside, the rows of the pink bricks are decorated at the seams by a line of white paint, an Italian-inspired touch that dates from the building’s construction.

Since its restoration in 2000, the orangery today shelters a collection of citrus trees, palm trees, and Mediterranean plants. It also serves as an exhibition room, a concert hall, and a reception room. 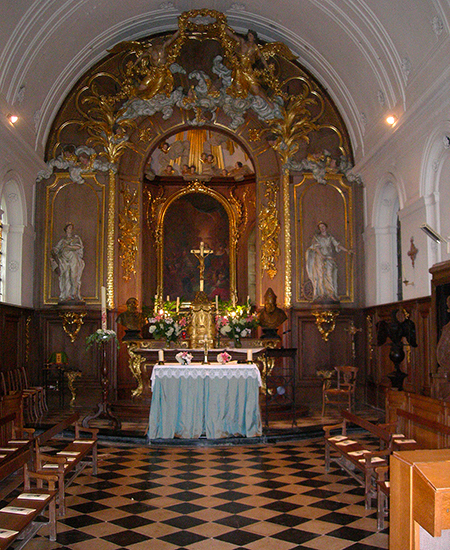 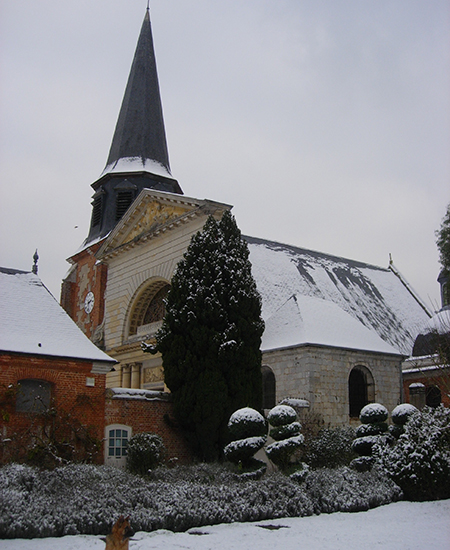 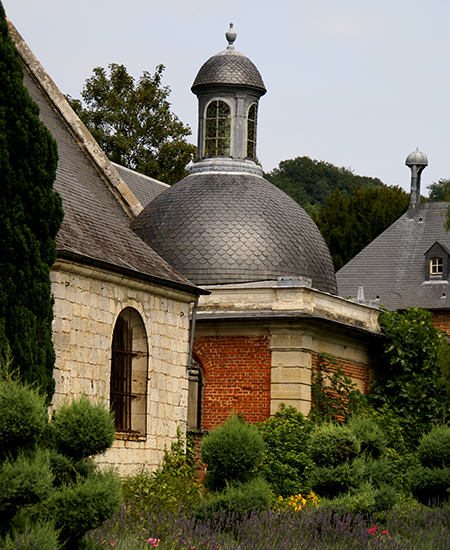 The church of Sainte Cécile of Acquigny, as well as its 18th century bell tower, was entirely reconstructed by Monsieur d’Acquigny. This parish church, much like all of Monsieur d’Acquigny’s constructions, was designed by Charles Thibault.The magnificent interior ornamentation in the “Rocaille” style (18th c.) in three plans (nave, choir and chapel of the Holy Ghost) lends it a consistency and a richness that is not often found in provincial village churches. The neoclassical façade derives from the ongoing construction from 1755 to 1783. Monsieur d’Acquigny called on the grand artists of the period such as Fouquet, Lamine, Jean-Baptise Huet, Peyron, and more to decorate the interior of the church. His children served as models for the decorative angels, and his wife was the model for the face of the statues of Sainte Cécile and Sainte Catherine of Alexandria. The decorative pattern of the chapel behind the choir, which served as the château chapel until the Revolution, honors the Holy Ghost. Monsieur d’Acquigny commissioned this theme to thank the Lord for giving him a long-awaited son, who was born on the day of the Pentecost, the feast of the Holy Ghost, and who was named Esprit (Spirit).

In the 18th century, the church plaza was framed by the former presbytery, made for the orders of friars and nuns, a boys’ school, and a girl’s school behind the convent on the road to the church. This beautiful ensemble of buildings was constructed by Monsieur d’Acquigny to fulfill the needs of the inhabitants of the village of Acquigny. For more information about the church, you may consult the website of “les Amis de l’église Sainte Cécile d’Acquigny” (Friends of the Church of Sainte Cécile of Acquigny), an association dedicated to renovating and restoring the church as well as improving the public’s understanding of it, especially through conducting occasional visits.